The debate over whether ETFs are dangerous to the market is finally getting a congressional hearing. Over the past year, ETFs have been accused of increasing market volatility as well as posing other risks to the financial system.

IndexUniverse.com published the congressional testimonies of the four panalists:

• Noel Archard, managing director at iShares, the world’s biggest ETF firm
• Harold Bradley, chief investment officer at the Kauffman Foundation, and co-author in the past year of two papers critical of ETFs
• Eric Noll, an executive at Nasdaq, the second-biggest U.S. exchange, in charge of transaction services
• Eileen Rominger, director of the Securities and Exchange Commission’s Investment Management division

“The Nasdaq Closing Cross is a price discovery facility which has become an industry standard for index providers, mutual fund managers and the investing public who seek accurate closing prices in microseconds,” said Eric Noll, executive vice president of Transaction Services, Nasdaq OMX, in a written statement. This year the Closing Cross experienced fewer shares in the rebalance than previous years.

The Closing Cross brings together the buy and sell interest in specific Nasdaq, NYSE and NYSE Amex stocks and executes all shares for each stock at a single price, one that reflects the true supply and demand for these securities. All nationally-listed securities are eligible for the Nasdaq Closing Cross. Official closing prices determined by the Nasdaq Closing Cross are widely used throughout the industry, including by Russell Investments, Standard & Poor’s, Dow Jones, and mutual funds across the country.

The Russell U.S. Indexes include only common stocks incorporated in the U.S., its territories, and certain countries or regions offering U.S. companies operational, tax, political or other financial benefits. All Russell U.S. indexes are subsets of the Russell 3000 Index, which represents approximately 98% of the U.S. equity market. Today, more than $3.9 trillion in assets are benchmarked to the Russell Indexes.

To honor the one-year anniversary of the publication of ETFs for the Long Run, I”m a publishing the photos from my biggest media event.

My friends in and out of the ETF industry join me as I ring the Closing Bell at the Nasdaq Stock Market Aug. 19, 2008

Last summer, to help promote the publication of the book and in appreciation for telling the Nasdaq’s influencial part of the history of the ETF, I was invited to ring the closing bell on Aug. 19, 2008.

I've just received the Nasdaq's highly coveted blue glass award for effectively closing the market that day from Richard Keary, former managing director of Nasdaq's exchange-traded products business. Without me, people might have traded until midnight.

Why publish these now? Well, at the time this occurred I  just started the blog and didn’t have the hang of it yet. Then the financial world blew up. 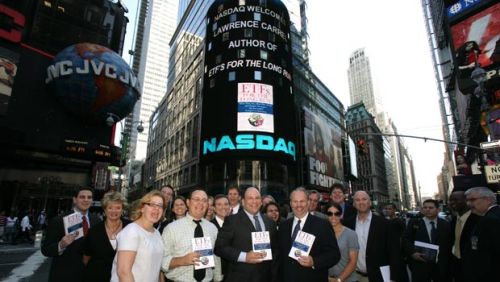 My friends and I in the middle of Times Square. When the Nasdaq's behind you like this, you know this is an important book. What are you waiting for? Order a copy now.

A few weeks later, I had the “good fortune” to have my book hit the bookstores the week Lehman Brothers went bankrupt. At the time, people were worried about the financial collapse of the entire Western World and the coming of the second Great Depression. So, no one really wanted to celebrate a book talking up Wall Street products. But things are better now. I want a redo.  So, I’m ramping up publicity and this is the beginning. 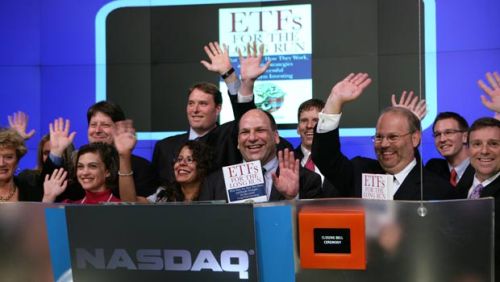 RevenueShares Investor Services launched the RevenueShares Navellier Overall A-100 Fund (RWV) on the New York Stock Exchange ARCA. Less than a year old, RevenueShares is the most recent entrant in the ETF space for Fundamental Indexing. Proponents of the concept of fundamental indexing believe indexes based on fundamental metrics produce better returns than indexes based on market capitalization, such as the S&P 500. In a dig at WisdomTree, the fundamental house that builds indexes based on dividends, Sean O’Hara, president of RevenueShares, tells ETF Trends, while dividends can be adjusted, revenues are the one variable that can’t be fudged. Well, they can’t be fudged unless the company decides to do a little technique called stuffing the channel. In channel stuffing a company books sales from the future in the current quarter. But, that’s highly frowned upon, so it doesn’t happen much, so I won’t dwell on it.

Anyway, they take that revenues-based index and mix it with a quantitative methodology from Navellier’s firm Navellier & Associates. The strategy seeks to beat the benchmark indexes with what they call alpha generating growth strategies. Alpha is that bit of return that a manager’s skill adds to the fund’s returns. ETF Trends says “The fund is constructed using an 8-factor model to give stocks a letter grade. From there, the top 100 A-rated stocks are included and ranked by revenue annually on Sept. 1, and rebalanced on the first day of each calendar quarter.”

ETFguide says with only four broadly diversified international bond ETFs (including these two) and one emerging markets bond ETF these are the least populated areas in the U.S. ETF market. With 8.22 years as the average weighted maturity for the bonds, IGOV is the long-term option. ETFguide breaks down IGOV three largest country allocations: Japan (24.95%), Germany (9.28%), and Italy (8.74%). The bonds in the short-term ISHG have an average weighted maturity of 1.87 years and with the largest country allocations in Japan (24.95%), Germany (10.95%), and Italy (7.99%).

Stepping on the brakes

Much like other structured products that came of age during the past decade, the market crash of 2008 was the first serious test of how exchange-traded funds would react in a bear market. But while the surge in issuance has continued in Europe and Asia, growth rates in the US have slowed.

The exchange-traded funds (ETFs) industry outside the US has surged this year, with 253 funds launched by the end of September, a 69% increase on the same period last year and a figure that is already 27% bigger than all ETF issuance in 2007. During the two months to September 30 – one of the worst periods in recent stock market history – 83 ETFs were launched bringing the total to 1,499 funds on 43 exchanges worldwide, while assets under management hit $764.08 billion. Barclays Global Investors expects this figure …

This was originally published in Structured Products. For the full article click here.

According the the NASDAQ Stock Market, its average daily matched share volume of U.S. ETFs in October 2008 soared 240% year-over-year to a record 1.0 billion shares. Nasdaq says that’s more than any other U.S. exchange. It was also a 27% increase from September 2008. For October, NASDAQ’ s matched volume in U.S. ETFs reached a record 23.0 billion shares and matched market share in U.S. ETFs grew 2.3% from September to 38.5%.

Some of the biggest names in the ETF industry came together this week to discuss how the current credit crisis and stock market crash has affected the exchange-traded fund industry for better or worse. All these industry leaders sit on the editorial board of the Journal of Indexes, which held its first public meeting Tuesday at the Nasdaq Stock Market in front of a group of financial journalists.

Because most of the major trends in the indexing industry are directly related to ETFs, the Journal offers in depth coverage of the ETF industy. With ETFs now comprising between 35% and 40% of all the daily trading volume on the equity markets, the major conclusions of the meeting were that the ETFs are tackling a lot of these issues affecting funds because they are so transparent. But soon, investors will be asking the managers of their active funds, what exactly they’re doing to earn the high fees they’re charging.

The other main conclusion came from Lee Kranefuss, the head of Barclays Global Investors, which produces the iShares ETFs. He said that every time there was a problem in the markets, it tended to help ETFs. The technology bubble, the mutual fund timing scandal, the accounting scandal, have all inadvertantly extolled the virtues of the transparency of ETFs.

A big way the credit crisis has affect the indexing and ETF industries is by reducing the seed capital to start new ETFs, said Steven Schoenfeld, the head of Northern Trust, with produces the NETS family of ETFs. He added it’s also reduced the ability to facilitate large trades.

My Presentation at the Nasdaq Gets Write Up

My presentation at the Nasdaq on Oct. 8 was the highlight of this story in the Financial News.

Speaking at a panel hosted by exchange operator Nasdaq OMX, Lawrence Carrel, author of a recent book about ETFs, said that the instruments were the direct result of the 1987 stock market crash when the Securities and Exchange Commission began searching for a basket product that could absorb some of the extreme volatility and uncertainty in the US stock market.

Carrel pointed out that in recent months, as the stock market has become increasingly volatile, ETFs have hovered at between 30% to 40% of the dollar-weighted trading volume in the US equity market.

Carrel said: “Did ETFs achieve what the SEC wanted: to absorb some of the market shock? Yes, they have lessened volatility because the baskets are being traded rather than the individual shares.”

Amidst the mayhem on Wall Street, Invesco PowerShares Capital Management launched six new ETFs on the Nasdaq Stock Market. If you wonder why, it’s because it can take so long to get an ETF through the regulatory process, that when the SEC approves your application, you pretty much go ahead with the launch, even if the market is crashing all around you .

It appears that PowerShares is taking on Van Eck in the area of commodity stock, killing Van Eck’s monopoly on steel, gold and coal stock funds.